There are few fat people in Japan.  Most Japanese ride a bike and walk, rain or shine, and walk up and down many subway steps. Also the Japanese diet is one of the healthiest in the world, resulting in the lowest rates of obesity amongst men and women. People who stuck to Japanese dietary recommendations of eating mostly fish, soy, rice and vegetables and a minimal amount of dairy and fruit had a reduced risk of dying early from heart disease or stroke, according to a recently study by the British Medical Journal.

During my stay in Japan I have enjoyed getting to know, eat and start cooking with many of the healthy and delicious traditional Japanese foods that lend well to our vegan/vegetarian lifestyle.

Miso, fermented soy soup and seaweed and even salad made of vitamin and fiber-packed cabbage and daikon radish covered with goma, sesame dressing, or irodori gobou made from burdock and lotus root, are what’s for breakfast rather than fattening syrup drenched waffles or cream cheese covered bagels.

For lunch and dinner there is an inexorable array of soy products such as tofu and natto, or adzuki beans as well as noodles and vegetables cooked in dark sesame oil, mirin and soy sauce. I also drink lots of antioxidant-packed green tea, soy milk as well as amasake.

Over the past 150 years, however, the Japanese diet has become a blend of traditional Japanese with Chinese and Western foods, which gradually found their way into the Japanese diet since the Meiji Period (1868–1912) and in force after World War II. The results added a more balanced diet with oils and protein, but there is also a downside to the Western diet’s influence in Japan.

Irodori gobou, made from lotus root and burdock, another health breakfast alternative.

Upon his arrival in Japan, Supreme Commander of the Allied Powers in Japan General Douglas MacArthur is said to have remarked, “I came to replace the Japanese diet of rice, vegetables, fish and miso with bread, butter, milk and ham.”

In April of the year 675 A.D., the Emperor Tenmu prohibited the killing and the eating of meat throughout Japan, and Christian missionaries in 1549 found that the people believed that drinking milk was basically the same as drinking blood, according to Researcher Zenjiro Watanabe.  Christians influenced the reintroduction of slaughtering animals and meat eating in Japan by the Edo era between 1603 and 1868. 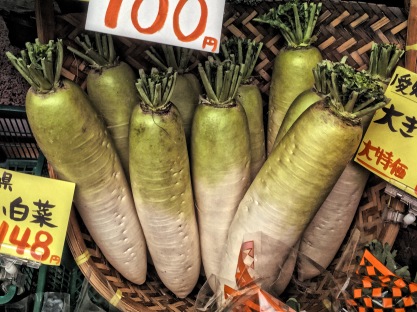 Although Europeans and Americans have gradually come to appreciate the benefits of a rice and fish diet, unfortunately the Western diet has lead to increasing obesity rates in Japan as well as lower life expectancy rates. While Japan’s obesity rate is 3.6%, the U.S. has a stunning epidemic of obesity – 40%!

Diabetes is also on the rise, especially among Japanese men, due to more sedentary lifestyle, increased fat intake and obesity. Everywhere I look there is more and more junk food filling grocery stores due to globalization, and the sweet smell of baked goods from refined flour as well as fast-food and soft drinks are many of the carbohydrate culprits invading the healthy Japanese diet these days. Too much fats from meat and dairy are other culprits, as most Asians are lactose intolerant anyways, meat is proven to cause cancer, and dairy has its own host of illness related to its consumption.

I will take the Japanese diet, thank you! With our vegetarian/vegan twist. Because the Japanese diet, Watanabe wrote, which contains mostly vegetables, rice and fish, was first recognized as generally superior to Western diets by the Ministry of Agriculture, Forestry and Fisheries of Japan in 1980 based on:

2: The Westernization of the Japanese diet following World War II reduced the excess carbohydrates and eliminated the deficiency in fats to provide the optimum nutritional balance of carbohydrates, protein and fat.

3: While the proteins found in Western diets are primarily animal proteins, the ideal nutritional balance of the Japanese diet is maintained with proteins derived from fish and vegetables.

May you be inspired to eat more like the traditional Japanese for health and more! I will be publishing detailed accounts of some of these Japanese foods I love so much as well as my original recipes I’ve created from them in future posts! Stay tuned!

10 thoughts on “For Health and Longevity, Turn to the Traditional Japanese Diet”