Dragonfly on a lotus flower in bud at Saihō-ji Zen Buddhist Temple in Kyoto, Japan. Nature is so profoundly beautiful here. It is the best yoga to wake you up! Photo by Sydney Solis

Should I stay or should I go now? That was the question posed to myself after realizing that all of the expats I know are leaving Japan for the summer to visit their home countries or simply to escape the summer heat.

Now, I have lived in St. Croix in the U.S. Virgin Islands where it’s insanely hot during the summer, and air conditioning is insanely expensive. I learned to take three cold showers a day to cope! Plus home in the US is Florida! But big city heat is different!

Also I arrived in Osaka last summer June 24, and my father died that day I moved to Japan. I spent a week in Japan to finish my visa and get my residency card and more, but I turned around and flew to Colorado for a week of bereavement before flying back to Japan July 7, smack in the middle of one hot summer!

I promptly got adrenal fatigue, migraines and more which my amazing Japanese chiropractor next door solved for me. I learned quickly to use a fan, towel to mop my sweating body and get a parasol for the intensive rays of the sun! I vowed to leave Japan next summer, however, my husband’s business only pays for one Business Class plane ticket a year. 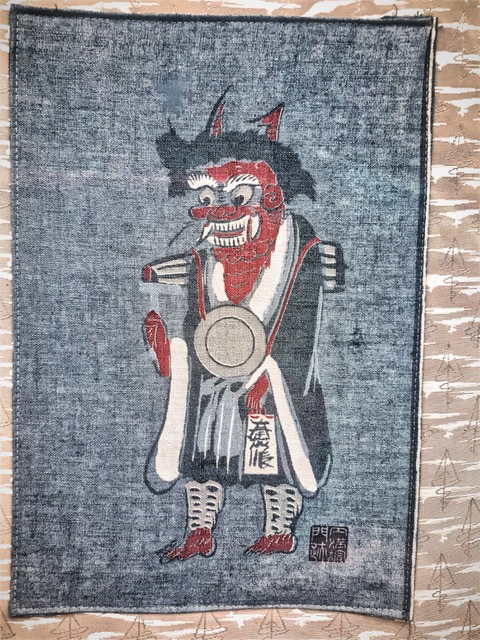 Amazing folklore and culture are everywhere in Japan! So much to see here, even in the hot summer. There are tons of festivals in Japan during the summer. I survived last year. I will again!

Now, I have traveled economy all over Europe, S. and Central America and the US and Caribbean and don’t mind it at all, however, this far on the other side of the planet all the way to Orlando – that’s another story!

I’d die, to put it simply. I barely make it Business Class! At 51 and after living abroad as a widow with two young kids for years…. I don’t travel so well that far. Too much travel disturbs my vata dosha. Grounding makes me happy!

But then I will roast here in Osaka, and the isolation is difficult, as most expats I know live in Kobe or Kyoto rather than Osaka. I love it, and my Japanese is coming along great, but it can be lonely with everybody gone. I really want to go home for a while! BUT….

Instead of spending at least $2k on a ticket and having a nervous breakdown with the 24-hour trip, I’ve decided to stay, and as a friend put it, have a “Japanese summer.” My two kids are coming to Japan June 12-25. Even though it’s the rainy season (I love rain… big reason why I left Colorado after 38 years living there. Plus the flowers are so much brighter!) So we will have some fun together. Plus, all my stuff arrived not too long ago from the US that I shipped, 300 books and all! So staying put and grounded is a good thing.

Food is so insanely delicious here in Japan! How I would miss it! Here are matcha soba noodles and brown rice topped with green tea sprinkles. Healthy stuff!

Of course, yesterday was a steamy, extremely humid hot day. The subway and trains were miserable hot getting to Rokko Island in Kobe for my shodo class. I may just hop a plane yet, if it gets too hot! But so far I’m staying!

Here is a bucket list of some of the things I may or will/likely will do during the two months summer in Japan instead of flying home to the USA. You may find some interesting options too! Because Japan is such an amazing place, heat and all!

1) Take an intensive Japanese course – I love Japanese! Been taking it almost a year now!  I can even pick out some Kanji and converse!

2) MC a Writers in Kyoto poetry reading accompanied by jazz June 24. Which I am! Join us! I will be writing lots of poetry this summer.

3) Practice shodo, Japanese calligraphy. Been taking classes! Of course put together the gazillions of photographs I have into books and portfolios or frames, finish art and more!!!

3) Write haiku. I belong to the Hailstone Haiku circle and have been taking monthly classes. Founder Stephen Gill is planning a haiku writing session in which we will wear yukata during the Gion Matsuri in Kyoto. I was in Osaka for Tenjin Matsuri last year and it was terrific! If not insanely hot!

3) Do some forest bathing in Nara. Nature is divine and very healing!

I have come to really love the shodo, Japanese calligraphy, classes I’ve been taking. Such a great Zen practice! I will be practicing, as it combines everything yogic – breath, energy, movement, no mind. I recently got a new brush and my own Gain, name stamp!

5) Visit some more Zen Buddhist temples for more zazen and sutra copying experiences. I’m also planning on going to Koyasan of Shingon Buddhism near us in Wakayama.

6) Write some more Foodspotting articles for Kansai Scene magazine, of which I wrote about vegetarian food in Osaka for the June issue.

7) Volunteer to teach my Storytime Yoga for Kids at an orphanage in Osaka. I created Kamishibai stories with world folklore long before I ever imagined I’d live in Japan! I’m a member of the International Kamishibai Association of Japan and attended a Peace Through Kamishibai seminar in Tokyo last November.  I likely will teach via Smile Kids Japan.

8) Trek north to get to cooler territory, like Hokkaido to visit the Ainu peoples and learn about their culture, the closet anthropologist and culture junkie that I am!  and commune with nature. I will start in Sapporo to visit Ainu People’s Ainu Center and other places.

My efforts as a beginner shodo student with the kanji symbol for peace.

9) Make my way down from Hokkaido back home through Northern Japan. A childhood friend of mine from Boulder, Colorado childhood, Phil Bender, who is married to a Japanese woman made these suggestions:

“If you stay in Japan for the summer, consider a visit to Takayama. It is up in mountains so sukoshi cooler. Lots of arts and crafts, grass-roofed village houses.  One of my fave places.”

“Yamagata. I’ve never been there, but it is sister pref to Colorado and supposed to have beautiful mountains and traditional villages, one of the more remote, less traveled parts of Japan.”

Wonderful books sent to me by Basho Translator and Scholar Jeff Robbins. Contact him at Basho4now (@) gmail.com to get a copy!

10) Finally : Read Basho (again) and pilgrimage to some of his places in Japan, even around my house in Osaka. I live a few blocks from this 17th Century Haiku Master’s final resting place here in Osaka.

He was supposed to read poetry from the Sorihashi Bridge at the Sumiyoshi Taisho Shrine, but fell ill and died a few days later. I’ve read his The Narrow Road to the Deep North and Other Travel Sketches several times before ever imagining I’d end up in Japan.  So I plan on doing a self-guided pilgrimage and follow his footsteps.

I met a Basho scholar and translator Jeff Robbins when he gave a talk at a Writers in Kyoto last October. He gave me some ideas for following in Basho’s footsteps:

Tohoku is the Mogami River boat: it should be cool on there, and Basho will be with you.  If you want to climb a mountain to the coolness, I recommend Mount Yudano which Basho mentions in his journal.  Here is a section from my work:

“Basho and Sora climb Mount Yudono to the famous shrine where the kamisama reside inside a large, reddish rock, shaped like a man’s testicles, with hot water gushing from the side. Pilgrims can climb the rock or enjoy walking barefooted through the hot stream flowing from the massive rock.

Restrictions set for pilgrims to Mount Bathhouse
forbid telling the details of one’s experience here,
so now my brush stops and I give no account.

We see why this shrine forbids telling one’s experience on the mountain—the place is so charged with sexuality that it cannot be discussed in polite Japanese. Translators show no awareness of the eroticism; they say that you are not supposed to reveal your experience because the place is so ‘sacred’ and ‘spiritual.’

Of course there are other famous places to see in Tohoku associated with Basho:  Hiraizumi where Yoshitsune died and Basho wrote Summer grasses / Great warriors, the traces / of their dreams, and Risshaku-ji where he wrote  Solitude / Penetrating the rocks / Cicada cries, and Matsushima where he wrote Islands beyond count, towering like fingers to heaven or lying flat on their bellies across the waves some pile up in double layers or fold in triple, branching right or stretching left,  some carry behind, some hug in front, beloved children or grandchildren. The pines are deep green and so bent by the waves their crookedness seems to be inherent — the scene as a beautiful women adorns her face –

So! Wish me well!

Have a great summer!

What are your recommendations for summer in Japan! Do tell in comments below! 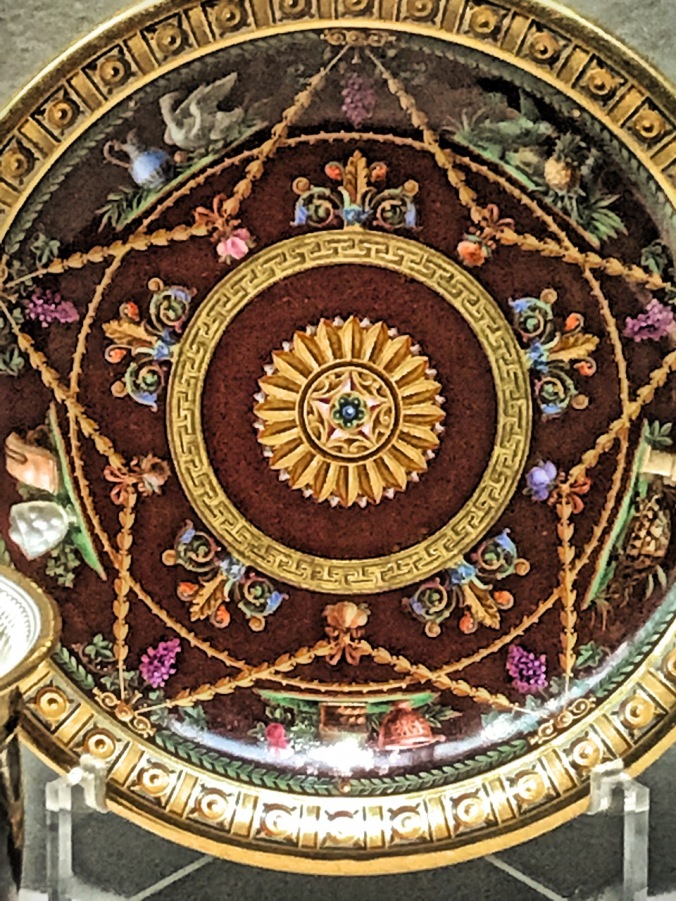 Severes plate at Museum of Oriental Ceramics, Osaka. When it’s hot outside, it will be time to take in lots of museums with great air conditioning! Have been seeing lots of temples outside. Time for those museums!

6 thoughts on “My Japanese Summer – List of 10 Things to Do in Japan!”