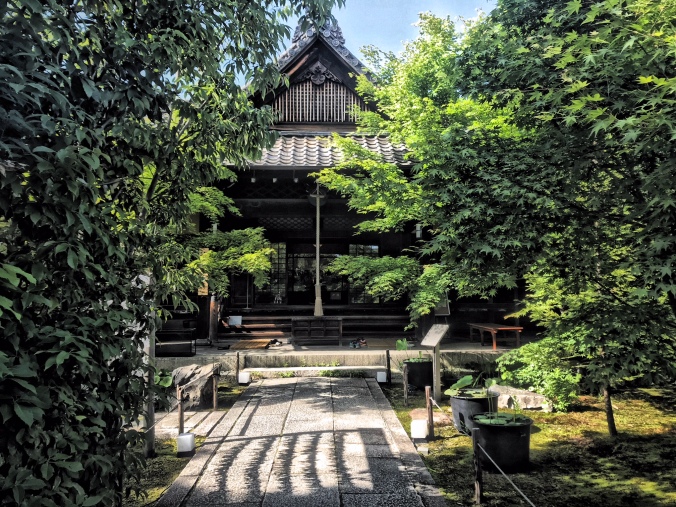 The entrance to Shorin-ji Zen temple, Kyoto, Japan, where I had two Zazen and a yoga and sutra copying experience. Photo by Sydney Solis

To be admitted to Saihō-ji 西芳寺 Zen Temple in Kyoto and view its famous moss gardens you first have apply for permission months in advance.  If accepted, you then pay 3000 ¥ and are required to do sutra copying.

Shorin-ji Zen Temple in Kyoto Japan where I sat doing image copying and gazing out the window in sublime reflection. Photo by Sydney Solis

Sutra copying was something I had been eager to do when I signed up for this trip with the Community House and Information Center (CHIC) in Kobe. I had been on a Zazen and hatha yoga experience to Bishomon-do Shorin-ji Zen Temple in Kyoto back in May with CHIC and loved it. I went back to this sub-temple of the Tofuku-ji Temple two weeks later for more Zazen and to experience sutra copying.

The image of a Buddha that I was given to copy at Shorin-Ji Zen Temple in Kyoto, Japan. Photo by Sydney Solis

Although maybe because I was a Westerner I was given an image of a Buddha to copy at Shorin-ji instead of the tiny Kanji sutra copying others were doing. Nonetheless, I embarked on the task in the quiet, serene atmosphere of the temple, feeling like a child as I used a brush pen to copy the intricate lines. They gave me a little jar of sandlewood to sniff during my practice where I worked sitting at a low table.

After I was finished copying the image, I offered it to the Buddha at Shorin-ji Zen Temple. It was a lovely practice in non-attachment! Photo by Sydney Solis

My mind wandered over the image, doing easier than other more difficult portions first, as my rational mind thought. At some point my mind began to relax into it, just doing the work rather than thinking too much about it. It became effortless, my mind absorbed.

In yoga, this is called dhyana, a deep meditation that produces a quiet mind without focus, which comes after dharana, meditation and a focused mind. Dharana and dhyana are some of the 8-limbs of yoga and come right before the ultimate goal of yoga, samadhi. Zen is actually a Japanese pronunciation of the Middle Chinese word chan for dhyana. 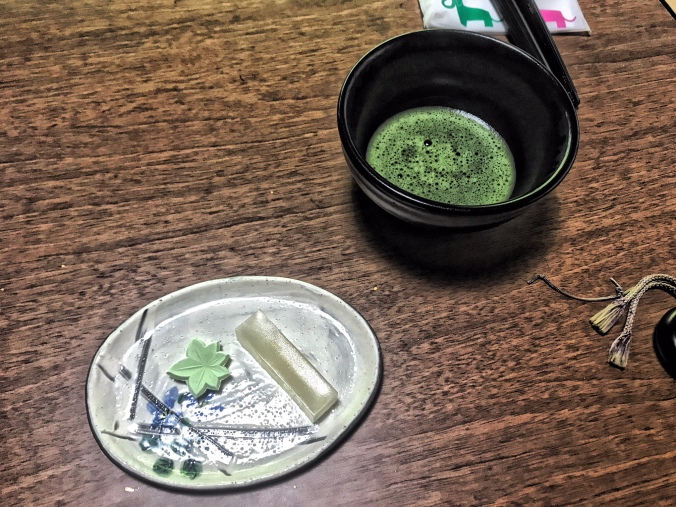 Matcha and wagashi, Japanese sweets, presented to me when I finished copying my image at Shorin-ji Zen Temple. Photo by Sydney Solis

Indeed the process of copying those image lines quieted my mind and led to a quiet alertness of everything around me. I experienced the sublime beauty of the greenery outside, the stillness of the others working. By the end, a great epiphany came to me.

At my first Yoga and Zazen experience with CHIC Kobe friends at the Shorin-ji Zen Temple in Kyoto, Japan. Photo by CHICKobe.

As I was finishing copying, having started from the bottom and worked my way up to the face, it dawned on me while working on the Buddha’s face that I was the Buddha, as all beings are Buddha beings, all beings and things have Buddha nature.  For the images are not external and separate but are representations of that which you already are – Tat Tvam Asi – thou art that. You just wake up to it.

After I finished I was presented matcha and wagashi, Japanese sweets. Then I was taken to offer my image and work to the Buddha statue that was inside a special room, where we had a special blessing the last time we were here. When I left, there was a lotus blooming! None had been blooming the first time I visited, nor when I arrived this time! 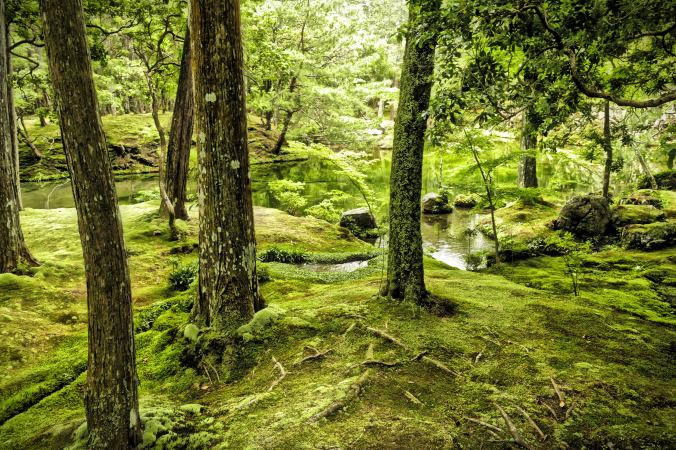 So this June trip to Saihō-ji was extra special, as my CHIC friends and I were accepted for admission. The main hall was packed with about a hundred others, mostly Japanese, all seated at tiny, low desks. The priest recited prayers, then we set to work copying sutras. I have been taking shodo, Japanese calligraphy, classes at CHIC, so knew how to use a brush, fude, paperweight, bunchin, and mix the sumi, ink stick, in the ink stone, suzuri. 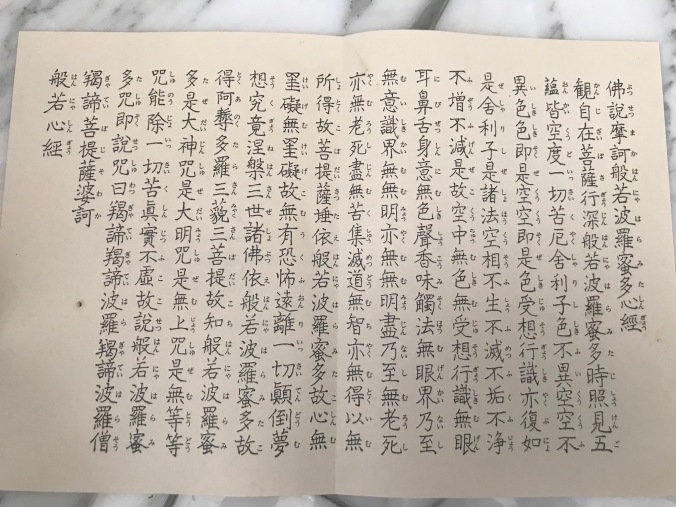 Sutra copying at Saiho-ji Zen Temple, Kyoto, Japan. I could pick out a few words, like heart, and child. I later learned a few like mu, nothing, and sky.

I set out copying the tiny Kanji. It took about 45 minutes. My mind again starting to wander about a quarter way. This time looking for some of the Kanji I already knew from shodo class, like heart, kokoro. I could also pick out child, ko, the easy two lines of the number 2, ni, and even God, kami. So I worked on those, and went back and filled in the rest. My mind eventually quieting and becoming alert and aware. 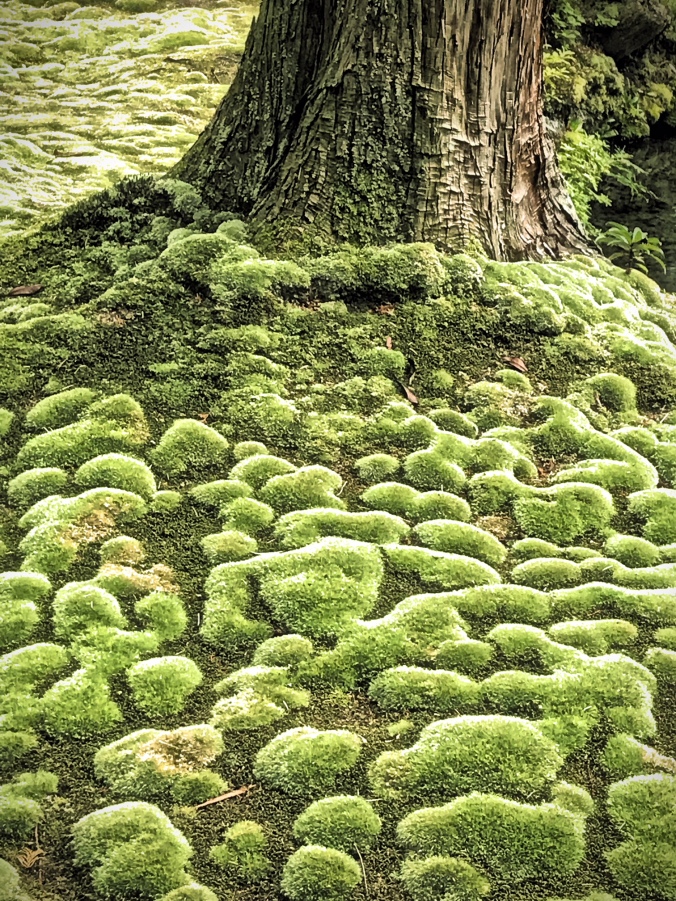 And what a great preparation the sutra copying was before viewing the stunning garden! While viewing, it was as if still in a state of dhyana, completely alert and aware of everything – nature – no mind!

The temple built in the 8th Century is often called Kokedera, moss temple, because of its over 120 variety of moss, amazing greenery and beauty designed by the distinguished Zen priest Muso Kokushi. 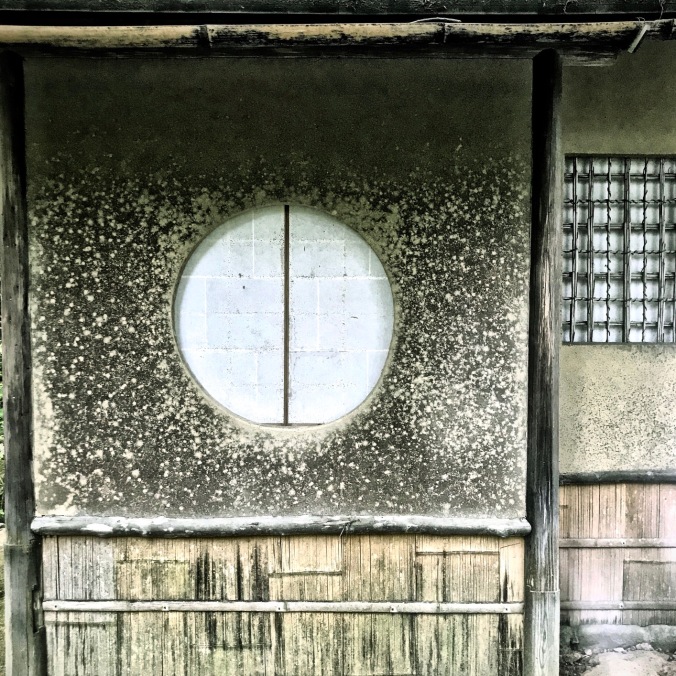 I felt blissed out the whole time walking around, even while taking pictures. There are tea houses, and gates, and the Zazenseki, the big stone on which Muso sat in Zen meditation. The garden is built on two levels.  The upper is in the karesansui dry rock landscape-style; the lower in the classical style with paths around a pond shaped like the Chinese character SHIN (heart.) We were just in time for the best viewing, the rainy season!

This Japanese Grey Heron seemed to be divinity itself as it followed us around the garden as we walked. Indeed, all things are a part of nature! All things are Buddha things! Photo by Sydney Solis.

Now, time to practice shodo! And write about it next!!!

Split trees with a shimenawa rope around it, demarking it as a sacred space and thing. At Saiho-ji Zen Temple in Kyoto, Japan. Photo by Sydney Solis

Goshuin from Saiho-ji Zen Temple, Kyoto, Japan. It took up two pages in my goshuincho! First time that ever happened. But well deserved!!!!

12 thoughts on “Sutra Copying, Yoga and Zazen in Kyoto”